Responding to the injured in Jerusalem: “The patients kept on coming like waves” An Doctors Without Borders doctor assesses a patient in a trauma point in the Palestinian Red Crescent Society (PRCS) hospital in Jerusalem. Palestine, 15 April 2022. © MSF

On Friday, 15 April 2022, Israeli forces stormed the Al-Aqsa compound in Jerusalem and injured over 150 Palestinians, including children. Carlo Brugiotti, a trauma surgeon with Doctors Without Borders / Médecins Sans Frontières (MSF) in the Occupied Palestinian Territories, was part of the medical team that assessed and stabilised the injured. Here, he reflects on what he saw that day.

It was 6:30 in the morning. I heard the voices of my colleagues Andrea and Otero talking outside of my room. It was clear that something urgent had happened. Andrea told me that the Palestinian Red Crescent Society (PCRS) had called. We had to go immediately.

Andrea is an Italian emergency doctor, Otero a Spanish Intensive Care Unit (ICU) doctor and anesthetist, and I am a Trauma Surgeon. Together we are part of the Doctors Without Borders trauma team based in Hebron, in the Occupied Palestinian Territories. That Friday, together with two other Doctors Without Borders general doctors, we set out to support the PRCS team in assessing and stabilising people who had been injured.

In Wadi al-Joz neighborhood, PRCS had set up a Trauma Stabilization Point to triage patients. Some people were to be treated by PRCS at the Al-Aqsa compound, while others with more severe injuries would be transported via ambulance to our trauma point or directly to the hospital.

Within minutes, the first ambulance arrived. The patient had a large bleeding head wound where Israeli police had struck him. Then two more ambulances arrived. One of the patients was a young girl, shot in the back with a rubber bullet – blunt-force trauma that could have fractured her ribs or other bones. We checked her lungs with an ultrasound and luckily, they were fine. We moved on to another patient with a wound on his lower back. He had been hit with a baton and was in a lot of pain.

He couldn’t move his legs. We suspected a spinal fracture. After stabilising him, we decided to transfer him to the nearest hospital for an X-ray. We wondered how badly he must have been beaten.

Suddenly, the girl with the rubber bullet injury fell on the floor having lost consciousness. Her vital signs were normal, yet she was shaking like a leaf. She was having an anxiety attack. Otero gave her medications to calm her. I thought about how horrible her experience must have been and how long the memories of the day’s violence would stay with her.

We saw another patient who was burned in the face by a stun grenade. This weapon is designed to produce a blind flash of light but when fired too closely can cause a terrible burn. Two more children arrived. One with a big cut on the head. He was hit. Andrea took care of him, while Otero and I examined the other child with a wound very close to his right eye. He could not remember how he was injured. We suspected a fracture of the cheekbone and transferred him to the reference hospital.

At around 10am we received an update from PRCS: the total number of injured people had reached 150. At least five were in critical condition and had been taken to an operating theatre to repair extensive damage to their faces after being shot by rubber bullets. These bullets, which often have a metal core, can disable, disfigure and even kill.

No matter how many trauma patients you see or war zones you work in, every time you treat a person who has been violently harmed by another human being, it is impossible not to feel a deep pain in the soul.

The patients kept on coming like waves. We tried to stabilise them as quickly as possible to empty the beds for new arrivals. Sometimes it seemed like the ambulances had stopped arriving, then suddenly two or three would come at once. It was the incredible experience of the PRCS paramedics, nurses and drivers in responding to such emergencies that made this intervention possible.

By 11:30am, the flow of patients had finally reduced. All injured people had been taken care of and it was time to have a break. Andrea, Otero and I decided to go for a coffee close to the field hospital on the Mount of Olives. On the way, an incredible image appeared in front of our eyes: a wonderful view of Jerusalem. We stood there and wondered how a place so magnificent could present the scenes of violence we witnessed just a few hours ago. No matter how many trauma patients you see or war zones you work in, every time you treat a person who has been violently harmed by another human being, it is impossible not to feel a deep pain in the soul. The Roman proverb from Plautus, two thousand years ago, was right: “Homo homini lupus” - man is a wolf to man.

Carlo Brugiotti is a trauma surgeon with Doctors Without Borders in the Occupied Palestinian Territories. 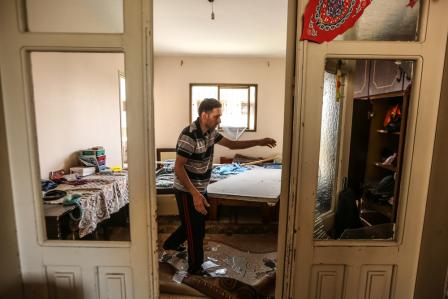 Surviving Gaza: the hopes and perils of living under blockade

Over one month since a ceasefire came into force between the Israeli government and Hamas, Palestinians in the Gaza Strip feel un...

Gaza: “Night and day, what we are living through is terrifying”

The fighting between the Israeli military and Palestinian armed groups, principally Hamas, broke out once again after weeks of te... 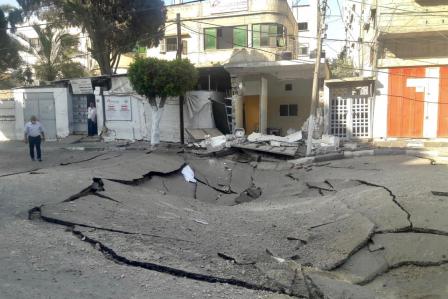 On Sunday, May 16, 2021, Israeli air strikes in the area of the Doctors Without Borders / Médecins Sans Frontières (MSF) clinic in Gaza city killed... 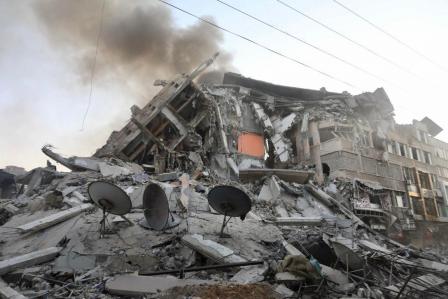 Heavy Israeli bombing pushing Gaza to the edge of catastrophe

In the wake of violence in Jerusalem that left hundreds of Palestinians, including children, with injuries, the international medical organisation ... 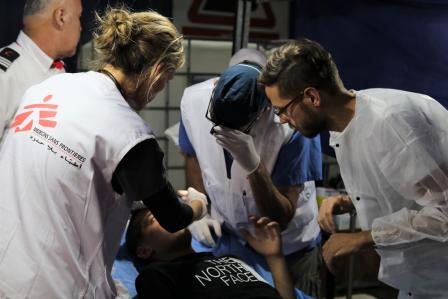