A boy is tended to outside Les Cayes General Hospital, after a 7.2-magnitude earthquake on August 15, 2021 in Les Cayes, Haiti. © Richard Pierrin/Getty Images/AFP

On Saturday August 14 at 8:30 am local time, a magnitude 7.2 earthquake struck the southern region of Haiti, specifically the provinces of Grand’Anse, Nippes and Sud.  But the tremors were felt in other areas of Haiti, too.

The Haitian Civil Protection General Directorate (DGPC) says 137,000 families have been affected in the Grand'Anse, Nippes and Sud departments. According to UN OCHA, about 650,000 people are in need of emergency humanitarian assistance.

According to initial assessments, 36 health facilities were damaged or destroyed by the earthquake (OCHA). Many hospitals had to evacuate their patients, and the facilities that continue to function are overwhelmed and experiencing a lack of medical equipment and medicines.

Following the earthquake, the area experienced aftershocks and landslides, causing additional damage. From the evening of Monday August 16 to the morning of Tuesday August 17, Topical Storm Grace passed by the southern peninsula causing extremely heavy rains, up to 10 inches/25 centimeters, and flooding. The storm has complicated rescue efforts by making more areas inaccessible and endangering tents and temporary structures being used for urgent medical care, aid and shelter. Our emergency response in Haiti

Doctors Without Borders / Médecins Sans Frontières (MSF) has over 100 international staff members and over 1260 Haitian staff members working in Haiti on our regular programmes and emergency response.

In the first hours after the earthquake, the Doctors Without Borders team based in Port-à-Piment and an emergency medical team from Port-au-Prince began assisting injured patients in Sud province.

In Port-Salut, an Doctors Without Borders team received patients with injuries and fractures, including patients referred from Port-à-Piment, Les Anglais and Les Cayes, and provided stabilization, surgical and follow-up care. 26 patients were received at this location on the first day.

On Monday, August 23, Doctors Without Borders began running a mobile clinic to more remote communities, including Maniche, Camp Perrin and Cavaillon, which have less access to aid and health care and were the most affected by the earthquake.

Doctors Without Borders has provided donations of medical supplies to three health centres, to facilitate (free of charge) stabilisation and referral of patients: Les Anglais, Chardonnières and Rendel.

A team arrived August 15 in the department of Nippes, where we visited two locations. The first, the Sainte-Thérèse hospital in Miragoâne, had received 59 wounded of which a number were referred to Port-au-Prince for further care for open fractures. Doctors Without Borders gave donations to the hospital and an Doctors Without Borders surgeon and nurse are providing medical support. At the second location, the town health centre of Petit Trou, the team saw more visible damages including to the water system. Most people were staying outside, out of fear of further collapse of buildings including at hospital structures, with the majority of medical consultations taking place outside. Doctors Without Borders gave donations to the health centre and a water truck has been organised to the city of Petit Trou de Nippes. From Monday 23, an assessment team started evaluations of 20 health centres damaged in the department of Nippes.

On August 17, the team moved to a third location, Baradères, in Nippes to assess the situation. The town is almost cut from all routes, making it difficult to get aid and supplies in. Many families were observed sleeping outside near their demolished homes. There were also a few families attempting to build wooden structures. The hospital in Baradères had seen around 60 patients in the first two days of the earthquake and around 15 were referred to St. Therese in Miragoâne for further treatment. The Doctors Without Borders team donated medical supplies and is trying find possibilities to access areas cut off from aid due to landslides blocking the roads. On August 19, an Doctors Without Borders team returned to set up tents for temporary health care, as well as installed a bladder at the Baradères health centre to ensure continued water supply to the centre and the community.

On August 17, an Doctors Without Borders team assessed the hospital in L’Asile (Hopital Communautaire L’Asile) as well a hospital in Bonne Fin, both of which were damaged in the earthquake. At Bonne Fin hospital, all patients and staff were outside, with just one tent for "hospitalised patients”. Doctors Without Borders donated medical supplies. At Hopital Communautaire L’Asile, all medical activities were being conducted outside with the building half destroyed and not stable. In total around 50-60 people had been referred to other hospitals for follow up care following the earthquake. The Doctors Without Borders team donated medical supplies, as well as tents (on August 19) to set up temporary health care and installed a motor pump and a bladder to provide clean water to L'Asile community and the hospital.

Some access routes, such as the road between Les Cayes and Jérémie, are seriously damaged, and complicate the deployment of aid. Doctors Without Borders is moving supplies air due to the difficulties with the road. A medical team, including two surgeons and an operating room nurse, was able to travel to Jérémie on August 15 and began working in St. Antoine’s hospital. As of August 20, the Doctors Without Borders surgical team in Jérémie has treated 54 patients for injuries suffered in the earthquake. Thirty-six of these patients underwent surgery, while others received casts or splints.  Doctors Without Borders brought medical supplies, including sterilization material, for the medical facility. An Doctors Without Borders team also assessed needs in the hard-hit communes of Corail and Pestel, which is 80 percent destroyed, according to local authorities.

In Port-au-Prince, the earthquake fortunately did not damage any infrastructure or buildings. However, injured patients from affected areas have come to the city for care.

Doctors Without Borders is treating injured people in our trauma hospital in Tabarre. As of August 23, the hospital staff have treated 60 patients injured in the earthquake, 40 of whom were admitted and 20 of whom were treated and discharged or referred elsewhere. After the earthquake, the hospital broadened its criteria for admission and expanded its bed capacity from 50 to 69 beds for trauma patients, in addition to its 20 beds for burns patients.

On August 15, Doctors Without Borders began providing stabilization care to injured patients at a new emergency centre in the Turgeau neighborhood of Port-au-Prince at the Integrated Diagnosis and Treatment Centre (CDTI), commonly known as the Sacré-Cœur Hospital, which wasn’t scheduled to open until later in the week.  Since opening, we have treated 133 earthquake victims from the southern peninsula and 152 other patients (as of August 22); 82 patients were referred to other hospitals for additional treatment.

To address potential blood shortages, Doctors Without Borders quickly launched a blood collection campaign in Turgeau on August 14 just hours after the earthquake, in partnership with local authorities.

The weekend of August 20, Doctors Without Borders’ Supply team in Brussels sent 100 tons of material to Haiti via two planes. The cargo includes items for setting up emergency medical structures and offices for our operations using tents; materials to install emergency drinking water supply systems for at least 30,000 people; and medical supplies for the care of 30,000 patients, including items for stabilisation, first aid, vaccination and blood collection. 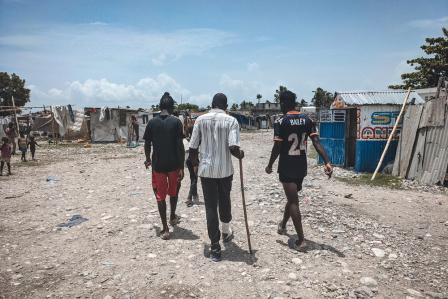 September 8, 2021—The greatest number of deaths and injuries from Haiti’s August 14 earthquake occurred in the country’s southernmost region, the S... 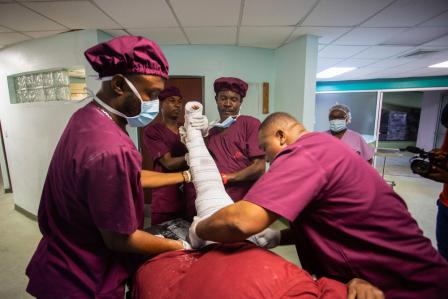 Haiti: After the earthquake, a multitude of challenges for patients

More than a week after an earthquake destroyed his home and fractured the bones of his leg, Widnika, age 2 years and 7 mont... 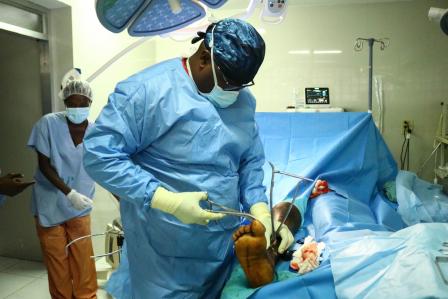 Haiti: After the earthquake, a surgical team works nonstop 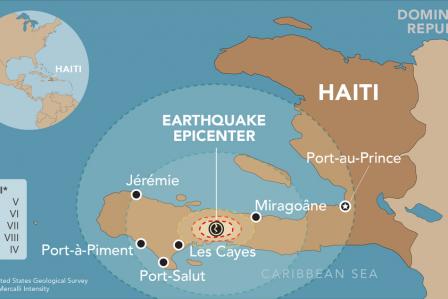 Haiti: initial evaluations and first interventions after the earthquake

Saturday, August 14, at 8:30 am local time, the earth trembled in the southern peninsula of Haiti. A 7.2 magnitude eart... On Saturday August 14 at 8:30 am local time, a magnitude 7.2 earthquake struck the southern region of Haiti, specifically the pro...
© 2021 Doctors Without Borders
Privacy Policy